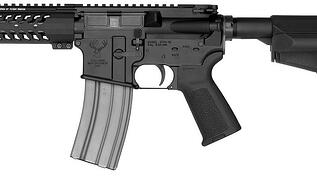 It’s All In The Small Parts

Since the STAG-15 and STAG-16 look very similar there are a few ways to tell them apart: 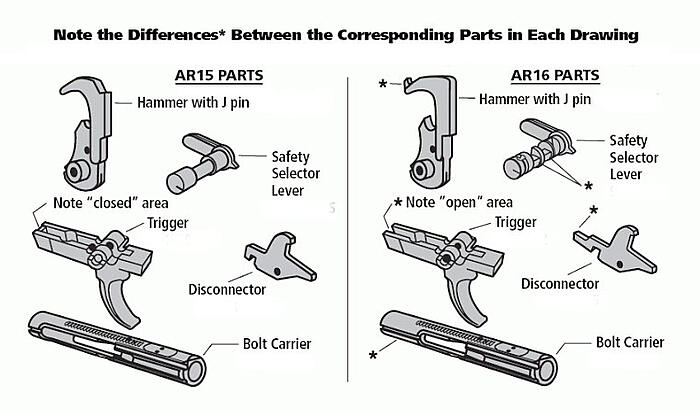 Take a good look at it from the top. If it has an open channel which goes all the way through the back end, you are holding a STAG-16 trigger. If the back end is closed, it belongs to the STAG-15. This channel is used to fit the disconnector.

The STAG-16 version has a “tail” at the end of it compared to the STAG-15 disconnector. This tail interfaces with the auto sear during burst or full auto operation.

Like the disconnectors, STAG-16 hammers also have extra metal called a “hook” on them which engage the auto sear.

Only found in STAG-16 rifles, the sear interacts with the hammer, disconnector, and bolt carrier to allow burst or fully automatic shooting.

A STAG-16 bolt carrier will have more metal on the bottom at the back of the carrier than a STAG-15 bolt carrier. This is the only STAG-16 part allowed in the STAG-15.

In the end, STAG-16 rifles have many different parts compared to the STAG-15 and these parts are not easily changeable, and precise machining of the receiver is required. Manufacturers won’t sell any burst fire or fully automatic parts except for the bolt carrier except to people who can prove they already have a STAG-16 rifle.

Newly manufactured STAG-16’s can’t be purchased except by government entities such as police departments. Personally owned legally transferred STAG-16’s usually sell for $12,000 to $20,000 and need to be transferred through the ATF’s NFA branch and a special “class 3” firearms dealer.