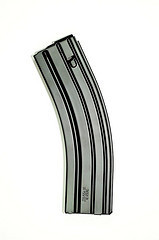 It is constructed of stainless steel and like all magazines they offer it has an anti-tilt follower to prevent jams. Like all Stag Arms products, the magazine is manufactured entirely in the United States. The 40 round magazines looks similar to the 30 round magazine except that the top part of the body above the bend is 2.5” longer to accommodate the extra 10 rounds.

Cartridges load easily into the magazine and it functioned flawlessly when shooting the rifle. There is a minor weight difference compared to the 30rd magazine due to the extra 10 rounds and magazine material but it wasn’t noticeable while shooting. It should be noted that this magazine isn’t recommended for benchrest or prone shooting because it will hit the bench or ground due to its length.