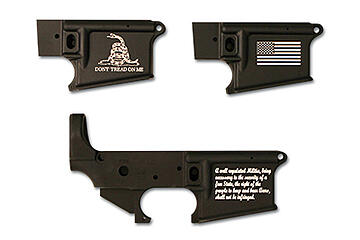 STAG ARMS, one of the world’s largest AR-15 manufacturers, is now adding specialized laser engravings on rifles and lowers with the American or Gadsden Flag on the magazine well.

These two new engravings are in addition to the extremely popular second amendment engraving. Unlike an imprint or coating, laser engravings penetrate through the anodized layer to the metal underneath, which makes it impossible to wear off.

STAG ARMS Sales Manager David DeFord said, “Everyone at our factory is proud of the USA and we are very vocal about our second amendment rights. We wanted our customers to be able to show the same patriotism.”

The cost for the engraving is $15.00 and must be requested at the time the order is placed. The engraving cannot be applied to the rifle or lower once it has left our factory. The engraved rifles and lowers can be purchased through our network of dealers, online in our webstore in the individual item pages as an upgrade option, or by calling our sales office at 860-229-9994 x1.

Founded in May of 2003, STAG ARMS LLC is one of the leading manufacturers of AR-type rifles and rifle components in the world. What began as a sister company to a corporation with over 30 years of experience manufacturing Aerospace and rifle parts, STAG ARMS has grown into a nationwide phenomenon with the introduction of their Stag 15L – the world’s first true left handed rifle of its kind.