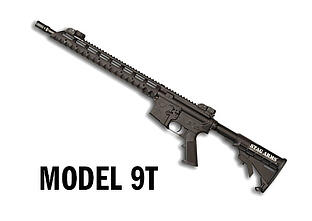 This series has been discontinued. Our latest 9mm PXC series can be seen here: Stag PXC Series

Compared to the 5.56 cartridge, the 9mm cartridge used in a carbine configuration is the ideal choice for short range & self defense use – up to 200 yards due to decreased muzzle blast, decreased muzzle flash, lower recoil, reduced over-penetration, and a heavier bullet.

An added benefit is that you can also shoot this rifle at most pistol caliber only indoor ranges.

Both the Model 9 & 9T series boast a 1/10 twist 16” heavy barrel, blowback action, a 6-position adjustable buttstock, and as always they are available in right & left hand configurations. The safety, charging handle, and magazine release function the same as any AR-15. However we have designed the actions of the rifles from the ground up. The rifles accept standard Colt style 9mm AR magazines which insert into the integrated magazine well in the lower receiver. The integrated magazine well won’t come loose or have feeding issues accompanied with drop in magazine blocks. Differences from a standard AR-15 can also be found in the lower receiver with a specially designed hammer, magazine catch, and buffer. In the Upper half, the bolt and carrier are one piece with a modified ejection port cover and brass deflector.