The 3 Main Rules of Firearm Safety & Why They're Important 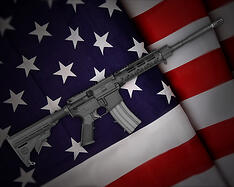 The safety precautions everyone must follow when using a firearm to ensure their own safety and the safety of others are simple. While there are many rules of firearm safety, three are of paramount importance and must be followed at all times.

1. Always Keep the Muzzle Pointed in a Safe Direction

This is the first rule of firearm safety. You are responsible for the bullet when it leaves the barrel. It basically has your name on it. The reason it is so critical is because if a firearm discharges and it is pointed in a safe direction, no harm will come to pass.

Depending on different circumstances and where you are, common sense dictates the safest direction.

2. Always Keep a Firearm Unloaded Until Ready to Use

In addition to always keeping a firearm unloaded until you are ready to use it, always check the action to confirm it is unloaded when picking it up or receiving it from another person. This is true even if the firearm is brand new in the box from the manufacturer. After verifying the firearm is unloaded, the person handling it should always treat it as if it is loaded.

3. Never Put Your Finger on the Trigger Until You are Ready to Shoot

Eliminate that possibility by never placing a finger on the trigger -- meaning do not have a finger inside the trigger guard -- unless planning to fire the firearm.

Other Rules to Keep in Mind

By extension of these three rules, all other errors associated with firearms are eliminated. For example, a general rule of firearms is never point a firearm at another person unless you intend to fire at them. This rule could easily replace rule number two, -- and there is nothing wrong with considering it a cardinal rule -- but the notion follows logically from the rule: always point a firearm in a safe direction.

Another rule of firearms is always keep the safety on, -- even if a firearm is empty -- but eliminating one of the three cardinal rules with this one opens the door for mistakes that the other rules prevent. As such, always keep a firearm unloaded until you are ready to use it. The safety is a mechanical device which can fail, so the person handling the firearms should always act as if the safety doesn’t work.

If a person always treats a firearm as if it ́s loaded, never points a firearm at another person, and keeps their finger off the trigger until they are ready to shoot, virtually all potential negligent discharges are eliminated.