Magnification: Can You Have Too Much? 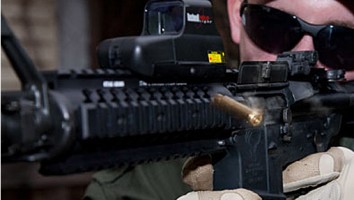 Choosing a rifle scope is at least as important a decision as choosing a rifle. It is not unrealistic to pay as much or more for the scope as the cost of the rifle. So it is no surprise that you want to get all the possible features for your money.

But when it comes to optics, you can get too much of a good thing. Adjustments that are too fine, reticles that are too complex, and the most common mistake: too much magnification.

Always fit your optic to the purpose for the rifle. The requirements that a competitive long-range shooter has for his scope are completely different that the requirements for a military sniper's scope, or a hunter's scope, and all are likely different than what is best suited for home defense. Snipers and skilled long-range competitors will likely know what they need, so we will concentrate on hunting and defense, or a combination.

At very close ranges a high-magnification scope makes shooting slower, or even impossible, as the hunter may see only part of the animal filling his scope, unable to determine what part of the animal he is aiming at. Remember that the speed at which a target needs to be engaged is normally determined by the range to the target. A close target needs to be engaged more quickly.

A 16x scope may be ideal for a competitive shooter, but could cause a hunter to miss a close target.

The classic variable-power hunting scope is a 3 to 9 power scope, for good reason. Today, there are a lot of excellent scopes that extend the magnification range, to 2.5 to 10 power, for example. When hunting, keep the scope set on the lowest magnification setting and then dial the magnification up when needed for more distant targets.

In self-defense, long shots are even more rare. A rifle intended for self-defense is normally best outfitted with red dot sight. If the rifle will be a dual-purpose rifle, used in both hunting and self-defense roles, a low-power variable scope may be ideal. Something in a 1-4x range, or 1.5-8x, or similar. Another option is a red dot sight and a removable magnifier.

3. Higher magnification scopes add bulk. As a rule, the higher the magnification range, the bulkier and heavier the scope is. Why add unnecessary weight and size to your rifle?

When choosing a scope for your rifle, don't be drawn in by flashy advertising. Think about the features being offered. Do you need them? Are they an advantage or a detriment?

Consider the purpose for the rifle. Determine the lowest magnification that will cover what the rifle will be used for, and look for a scope that has a similar magnification.