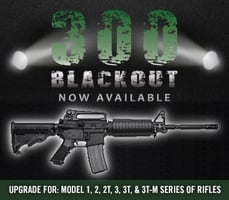 Stag Arms is proud to release its 16 inch AR-15 carbine rifles in the popular 300 AAC BLK / 7.62x35mm caliber. The company had researched and tested many different cartridges on the AR-15 platform before making a final decision. Stag Arms president Mark Malkowski stated “In addition to the upper halves we offer in this caliber we are now offering a complete AR-15 rifle using the 300 Blackout cartridges with heavier bullets, great ballistics, and already on the shelves of most major stores. By utilizing the same reliable AR-15 firearm platform customers can still use their standard accessories.”

The Model 1, 2, 2T, 3, 3T, & 3T-M series of rifles can now be purchased in the 300 Blackout caliber for an additional $50.00.  The barrels are 16” long and manufactured from 4140 steel with chrome lining on the inside to increase durability. The 1/7 twist rate is designed to work with all bullet weights in the caliber and the barrel thread for the muzzle device is 5/8x24.

The supersonic 300 AAC Blackout cartridge was designed to closely match the ballistics of 7.62x39 ammunition with a minimal number of non-interchange parts compared to a 5.56 NATO AR-15. To decrease the feeding issues that occurred with 7.62x39 ammunition on the AR-15 platform, the cartridge case was derived from the U.S. Military 5.56 NATO case and will work with standard AR-15 magazines while retaining their original ammunition capacity.

When ordering online, simply choose the caliber upgrade option on the item page.