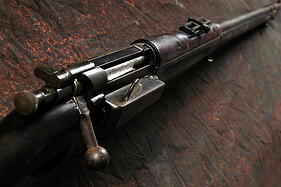 Firearm Technologies that Led to the Development of the AR-15

The Matchlock was developed sometime in the 1400s in Europe. It innovated the method with which firearms could be fired through the introduction of a slow-burning match, which would light the flash pan and ignite the gunpowder inside the barrel. This technology eventually allowed for the "rifle" form factor we are familiar with today, which significantly increased accuracy.

The Wheellock was developed in the 1500s and was the first firearm to will self-ignite. With a wheellock, a steel wheel strikes a piece of pyrite while it is spinning under spring-loaded tension. Sparks are thrown from the wheel lock to ignite the powder in the pan. This is similar to how a conventional cigarette lighter works today.

The Flintlock was an essential part of American history and played a major role during the first years of the United States' existence, particularly for American pioneers who hunted for their food. The Flintlock itself works through the use of a spring-loaded lever with flint inside of it. The flint was pressed against a steel flashpan, which in turn, would ignite the gunpowder.

The Rolling Block action is what put the gunmaker Remington on the map in the mid-1800s. The rolling block is a simple and reliable action that has few moving parts and jams very rarely. The hammer keeps the rolling block in place and ensures that the cartridge doesn't move backward.

The bolt action rifle was developed in the 1800s and was widely considered the successor to the rolling block mechanism. The bolt action utilized a metallic cartridge bolt, which was far more reliable than previous actions had been. The technology was so successful that it was used throughout World War I and in the early days of World War II.

The lever action revolutionized "repeating firearms" and allowed users to quickly reload -- which of course was a major advantage on the battlefield. The first popular lever action rifle was developed in 1860 by Christopher Spencer and was known as the "Spencer repeating rifle." The lever action itself was eventually used on everything from rifles to shotguns.

Semi-automatic technology is of course the technology used by the AR-15, and it revolutionized weaponry in its time. The first semi-automatic rifle was created in Germany by Ferdinand Ritter von Mannlicher and was further refined by John Moses Browning several years later. Semi-automatic weapons use a "closed-bolt firing system" to automatically chamber the next round using the same action that fires the round itself.