Tips, Tricks, & Suggestions for Shooting Tannerite with Your AR-15 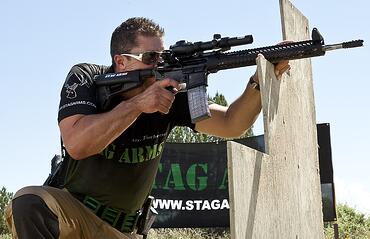 The first time your bullet makes contact with a pound of Tannerite, you might say “Holy cow this stuff is awesome?” The two components that make up Tannerite are: aluminum powder and ammonium nitrate. Both components are completely inert by themselves before mixed so it’s 100% safe to handle and legal to possess, as per the ATF. It is also safe to use because only a bullet, traveling at the minimum of 2100 FPS, can set it off.

Recently Tannerite has become more mainstream with the help of online videos depicting people using it. This has made Tannerite more readily available and can be purchased at most local gun shops, big box outdoor stores, or online.

Here are some simple tips, tricks and suggestions for shooting Tannerite with your Stag Arms rifle.

You are going to want to shoot it within a couple months of the purchase date because it attracts moisture quickly while in storage which can make the ammonium nitrate clumpy and will diminish the power, or could make it not work at all when mixed. It is also best to only mix it when you are ready to shoot it. In fact, one cannot drive with or store Tannerite when the two components are mixed, unless one adheres to federal laws on storing and traveling with explosives. Mixed Tannerite falls under the same laws as black powder where you are not legally permitted to have more than 50 pounds of it. Lastly, Aluminum powder alone is flammable so it’s best to keep the two components away from open flames and also separated if you choose to store it.

Once you hit the bag or jar of Tannerite with your bullet, you will see the bright flash, and explosion, but you might think that it wasn’t that loud. You would be wrong, Tannerite is loud and when it goes off the sonic crack of the bullet traveling down range, and the fact you most likely are wearing ear protection will dull the explosive sound. If you are looking to hear the explosion better, there are a couple tricks to achieve this.

First you need to pick up a Stag Arms 22 conversion kit for your Stag AR-15.Then buy some 22LR sensitive Tannerite. That’s right; they make a 22LR sensitive version that will go off with 22 long rifle round. This means you could even use the Stag Model 9 or Model 9T to explode some Tannerite. Don’t let the name fool you though, 22 sensitive Tannerite is still just as safe to use as standard Tannerite. The best part is pistol and 22lr bullets are not as loud as high powered rifles, which allows the sound to be heard much better.

Stag Arms suggests that you use Tannerite in a safe manner, and only use it the way it is intended. We cannot stress this enough. Tannerite is one of those products that can become illegal if someone gets hurt, or worse, dies, because he or she used it incorrectly. We would like to see Tannerite available for generations to come, so it can be used with our rifles and accessories. Also, if this is your first time using Tannerite, we highly suggest that you read the instructions that come with the product and follow them to the letter. If there are no instructions, the manufacturer’s website should have safe use instructions available. Lastly, we highly suggest all of our customer follow all local, state, and federal laws before purchasing and using Tannerite.

In closing, once you follow all safety measures and laws, you should have a good time using our rifles and Tannerite. Have fun and be safe.